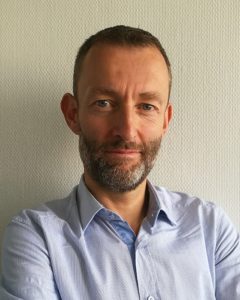 OBJECTIVES
Cardiovascular diseases still remain the major cause of morbidity and mortality worldwide due to the growing prevalence of obesity and associated metabolic disorders, including insulin resistance and Type 2 diabetes. Dyslipidemia, characterized by altered circulating concentrations of lipoproteins and lipids is a major component in the development of cardiometabolic diseases (CMD). As a consequence, lipid-lowering therapies are the privileged therapeutic strategy in CMD. Mechanisms through which lipids contribute to the development of metabolic disorders are multiple and involve complex signaling and regulation pathways at the both cellular and systemic levels. Importantly, it is now clear that a large spectrum of lipid species not only restricted to cholesterol and triglycerides participates actively in alterations of lipid and lipoprotein metabolism in CMD. Then, deciphering of dysfunctional lipid metabolic pathways might help to propose new therapeutic targets to prevent or hamper the occurrence and development of CMD.
Our recent pioneering studies leading to the identification by omics approaches of lipid networks and metabolic pathways controlling biological activities of plasma lipoproteins and cell activation in CMD open up new insights in understanding how alterations in lipid metabolism contribute to CMD onset. In particular, our recent findings lead us to revisit the current understanding of atheroprotective high-density lipoprotein (HDL) and triglyceride-rich lipoprotein (TRL) metabolism and its role in CVD.
Building on tight interactions with clinical and valorization departments, our research program aims to propose new candidate pathways, genes and biomarkers in the context of CMD.

THEME 1. Deciphering molecular mechanisms controlling cell and tissue lipid homeostasis in cardiometabolic diseases – Wilfried Le Goff
Maintenance of cellular lipid homeostasis is essential for preservation of tissue function especially in metabolic states characterized by a disturbance of lipid metabolism. Thus, alteration of lipid homeostasis in key metabolic tissue such as liver, adipose tissue and intestine, but also in vascular wall, is a frequent feature of cardiometabolic diseases (CMD). Macrophages are pivotal actors in the maintenance of tissue lipid homeostasis and activation of macrophages by bioactive lipids is a critical event in development and progression of these pathologies. Our previous works aiming the study of mechanisms governing macrophage lipid homeostasis uncovered a tight link between the membrane ATP-Binding Cassette G1 (ABCG1) lipid transporter and cellular triglyceride storage in CMD. Whereas we demonstrated that ABCG1 is not a significant actor in cholesterol efflux from human macrophages (Larrede S., 2009), this function being mostly carried by ABCA1 (Du XM, 2015), we identified a new role for ABCG1 in foam cell formation through the control of the bioavailability of lipoprotein lipase in macrophages (Olivier M., 2012). We extended our work in the context of obesity and revealed the contribution of adipose ABCG1 in triglyceride storage, fat mass growth and obesity in humans (Frisdal E., 2015). Importantly, the manipulation of ABCG1 brought to light the intimate link between sphingomyelin and triglycerides storage. We propose that ABCG1 could be a potential therapeutic target in obesity (PCT/EP2011/073140) and we are currently evaluating the impact of the ABCG1 targeting on diet-induced obesity and associated metabolic disorders.

THEME 2. Exploration of the close link between HDL phenotype and lipid-laden macrophage / histiocyte formation for the identification of new physiopathological pathways in rare human diseases – Wilfried Le Goff
Alteration of cellular lipid homeostasis is frequently observed in numerous pathologies although this latter do not result primarily from major defects of lipid metabolism but rather is a secondary clinical manifestation of the disease. Such a disturbance is associated with autoimmune or inflammatory diseases such as rheumatoid arthritis (RA), Systemic Lupus Erythematosus (SLE), Crohn’s disease or sepsis which are characterized by a chronic inflammation and a high risk to develop atherosclerosis and cardiovascular diseases. One of the common features in those pathologies is the presence of low HDL levels which is associated in some cases with dysfunctional HDL, both could be markers of disease severity. Our studies on rare diseases exhibiting lipid depots in lipid-laden cells under the form of Touton cells or foamy histiocytes brought to light the major role of HDL in those pathologies in the absence of any hyperlipidemia. Indeed, we reported that the reduction of both levels and cholesterol efflux capacity of HDL particles in necrobiotic xanthogranuloma with monoclonal gammopathy (NXG) promotes macrophage lipid accumulation and could contribute to cholesterol depots into giant Touton cells observed in skin lesions characterizing NXG patients (Szalat R., 2014). Moreover, this low HDL phenotype was correlated to the unique inflammatory signature detected in NXG patients as well as to the proinflammatory phenotype of blood monocytes and to their potential ability to be recruited into skin lesions. 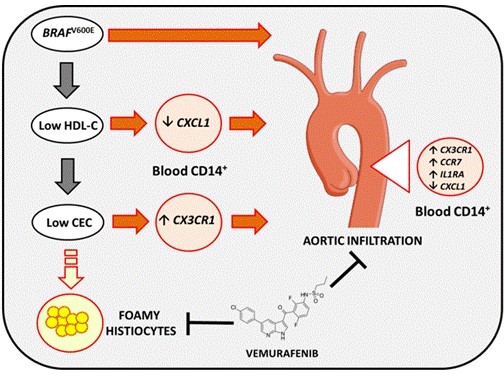 Our more recent works in Erdheim-Chester Disease (ECD), a rare form of non-Langerhans cell histiocytosis characterized by the infiltration of multiple tissues with foamy histiocytes, indicated that patients harboring the BRAFV600E mutation exhibit a hypoalphalipoproteinemia and a reduced capacity to promote macrophage cholesterol efflux which could contribute to foamy histiocyte formation. More importantly, cardiovascular involvement is frequent in ECD and leads to a severe prognosis and our findings uncovered a major independent role of both BRAFV600E and HDL in histiocyte infiltraton in aorta (Aubart-Cohen F., 2018).

THEME 3. Lipid metabolism and cardiovascular risk – Maryse Guérin
Despite aggressive low-density lipoprotein-cholesterol (LDL-C) reduction to therapeutic goals, a majority of patients remain at high cardiovascular risk, leaving CVD among the leading causes of death around the world. Thus inhibition of the endogenous synthesis of cholesterol should be combined with alternative therapeutic strategies targeting distinct metabolic pathways. The atheroprotective role of HDL particles is related to reverse cholesterol transport (RCT) pathway, which involves the centripetal movement of free cholesterol from peripheral tissues, to the liver. In man, we demonstrated the determinant role of Cholesterol Ester Transfer Protein (CETP) activity in the modulation of biological activities of HDL particles and in particular their capacity to mediate cholesterol efflux from human macrophages (Bellanger N. 2012; Villard E., 2013; El Khoury P., 2014). We defined an optimal range of CETP activity that may represent a future clinical therapeutic goal for endogenous CETP activity in patients with metabolic disorders at high CV risk (Villard E., 2012 and 2013). We demonstrated that the overall efficacy of the RCT pathway is altered in various metabolic disorders (El Khoury P., 2016) or inflammatory states (El Khoury P., 2015) and closely associated with clinical features of atherosclerosis (Gall J., 2016). More recently, we demonstrated that serum cholesterol efflux capacity, which reflects flow of cholesterol through multiple intravascular components of the reverse cholesterol transport process, is independently associated with long term survival in myocardial infarction patients (Guerin M., 2018). These findings identified serum cholesterol efflux capacity as a useful biomarker for identification of patients at higher risk of mortality after an acute coronary event. Improving/restoring serum cholesterol efflux capacity after an acute coronary event could potentially improve patient’s prognosis. Such hypothesis is currently being tested in the large ongoing AEGIS-2 trial and supported by our findings.
Blood cholesterol is the result of input from gut absorption and endogenous synthesis, relative to clearance through hepatic and extrahepatic tissue pathways. The cholesterol metabolism is equally closely linked to bile acids metabolism as bile acids represent end-products of cholesterol that are excreted into feces which represent an additional pathway for the elimination of excess cholesterol. Physiological or pharmacological induced changes in one of these latter parameters directly impact the others suggesting that therapeutic strategies for reducing residual cardiovascular risk needs a multi-level approach.
We propose to focus on major metabolic pathways implicated in the determination of body cholesterol pool that include not only cholesterol synthesis and absorption but also its intravascular transport and fecal excretion.
Significance. Aggressive reduction of LDL-C has been the cornerstone of preventive CV care for hypercholesterolemic patients at high CV risk over recent decades. Improvement in the prevention and treatment of atherosclerosis over the past 25 years has made it possible to decrease the death rate from CVD approximately by half. However, in France, the number of deaths from CVD still amounts to almost 200,000 per year, thereby highlighting the need for identification of new and more personalized therapeutic strategies. The next decade will likely be oriented towards new approaches to reduce residual CV risk, based on the knowledge of cholesterol transport, metabolism and catabolism. A rational for combination therapies based on knowledge of the physiological pathways is necessary for a personalized medical care.

THEME 5. Revisiting the present concept of HDL metabolism – Anatol Kontush
Decreased plasma levels of HDL-C are established as an independent CV risk factor. This association may reflect multiple atheroprotective properties of HDL particles, including cellular cholesterol efflux from macrophages together with numerous other activities. However, large-scale clinical studies aimed to reduce CV events by raising HDL-C concentrations have failed repeatedly. Indeed, although CETP inhibitors are highly effective for increasing HDL-C (up to +150%), clinical trials of these agents brought about predominantly negative results. Furthermore, data obtained using Mendelian randomisation do not support a causal relationship between HDL-C and CV risk. Such major controversy needs to be resolved in order to allow further development of cardiovascular therapies. It is important in this regard that our recent data show that increased HDL-C levels may be paradoxically associated with increased risk of CV disease. Indeed, we found, in collaboration with other international and national teams, that a mutation of SR-BI receptor that increases HDL-C levels also paradoxically increases coronary heart disease (Zanoni, 2016).
The sources of HDL-C in the circulation are of a key importance to clarify the relationship between HDL and CV disease. A large part of HDL-C is derived, in a form of free cholesterol, from triglyceride-rich lipoproteins (TGRL), including chylomicrons and very-low density lipoproteins (VLDL), upon their lipolysis by lipoprotein lipase (LPL). This process is greatly enhanced in the postprandial phase when circulating TG levels are elevated via secretion of chylomicrons but is also active in the interprandial state. Surface fragments (free cholesterol, phospholipids, apolipoproteins) of TGRL liberated during the lipolysis add to the circulating HDL pool; ensuing esterification of free cholesterol by LCAT expands HDL particles with a formation of lipophilic core. Importantly, cholesterol efflux from peripheral cells, including macrophages, which is presently considered to represent the major anti-atherogenic activity of HDL, provides only a minor contribution to HDL-C levels, which is greatly inferior to that of TGRL lipolysis. 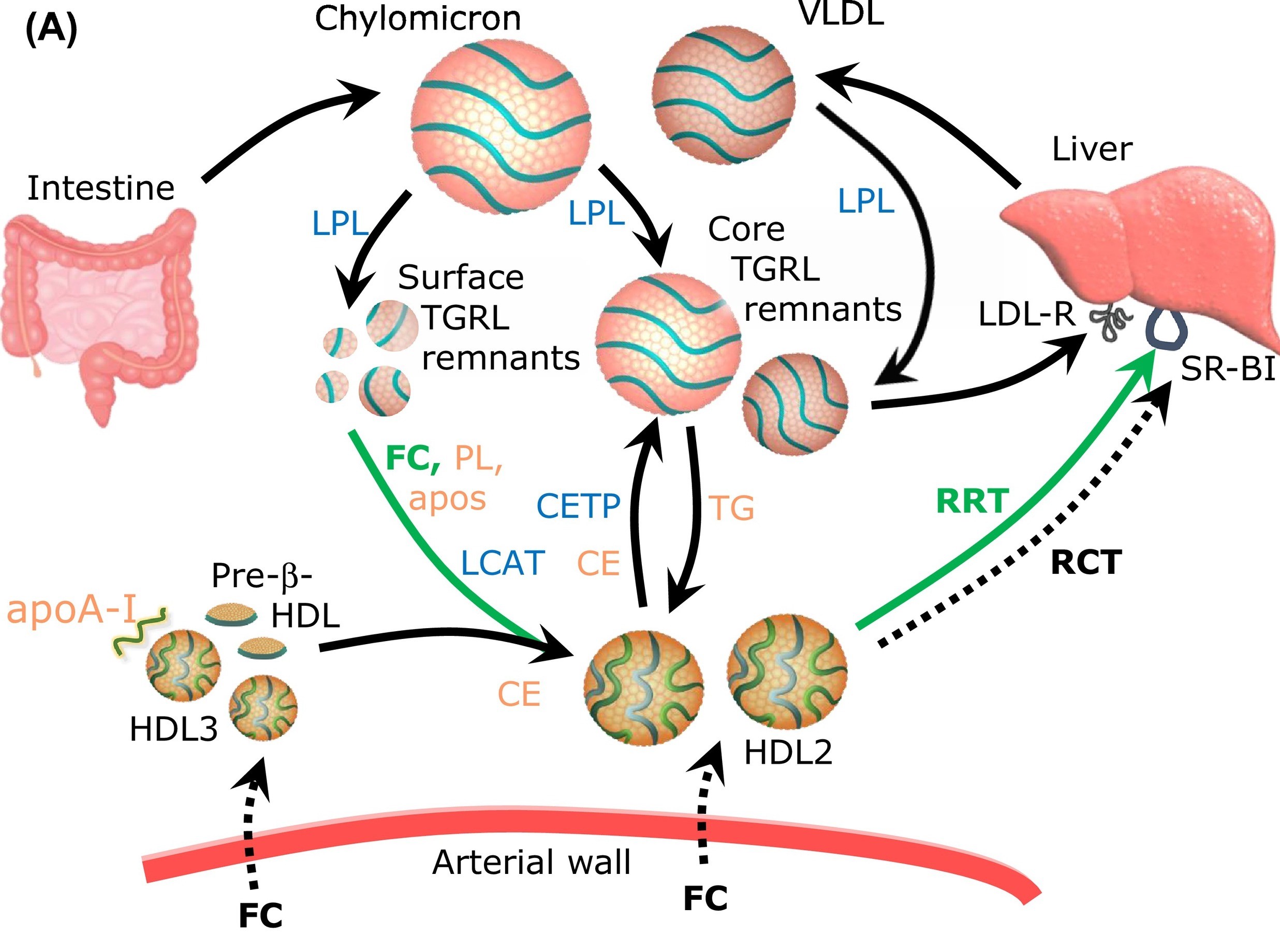 HDL prevents surface TRL remnants from accumulation in the arterial wall via acquiring phospholipid (PL) and free cholesterol (FC) during TG lipolysis.
An in vitro fluorescence-based assay to evaluate the capacity of HDL to acquire PL and FC from TRL upon LPL-mediated lipolysis.

Based on these data, we propose a working hypothesis that HDL plays a major role in the both post- and interprandial lipid metabolism, ensuring acquirement and transport of surface fragments generated during lipolysis of TGRL. Such lipid acceptor activity coupled to the transport of TGRL-derived surface lipids to the liver may represent a major function of HDL, which is presently overlooked by the mainstream research. As a corollary, HDL-C is an imperfect static measure of this dynamic pathway. In particular, low HDL-C levels associated with elevated CV risk may reflect insufficient cholesterol flux from TGRL to HDL upon lipolysis, resulting in the accumulation of cholesterol in pro-atherogenic TGRL remnants and in the development of CV disease. Lipid acceptor activity of HDL should therefore be diminished in low HDL-C subjects at elevated CV risk.

The major objective of this project is to evaluate the role of HDL in the post- and interprandial lipid metabolism as an acceptor of surface lipids liberated during lipolysis of TGRL. To achieve this goal, we primarily use a novel assay to measure lipid-accepting capacity of HDL under conditions of LPL-induced TGRL lipolysis in vitro, which was recently developed in our laboratory (European Patent EP17306042). We study mechanisms underlying the transfer of surface lipids from TGRL to HDL upon LPL-mediated lipolysis. The lipid-accepting capacity of HDL is investigated at the molecular level using modern proteomic, lipidomic and glycomic approaches to provide key information on structure-function relationships in HDL particles in both normal subjects and in patients with metabolic and CV diseases (acute MI, stable coronary disease, Type 2 diabetes, metabolic syndrome). This research is aimed at establishing clinical relevance of the assay to improve existing lipid-targeting therapies. 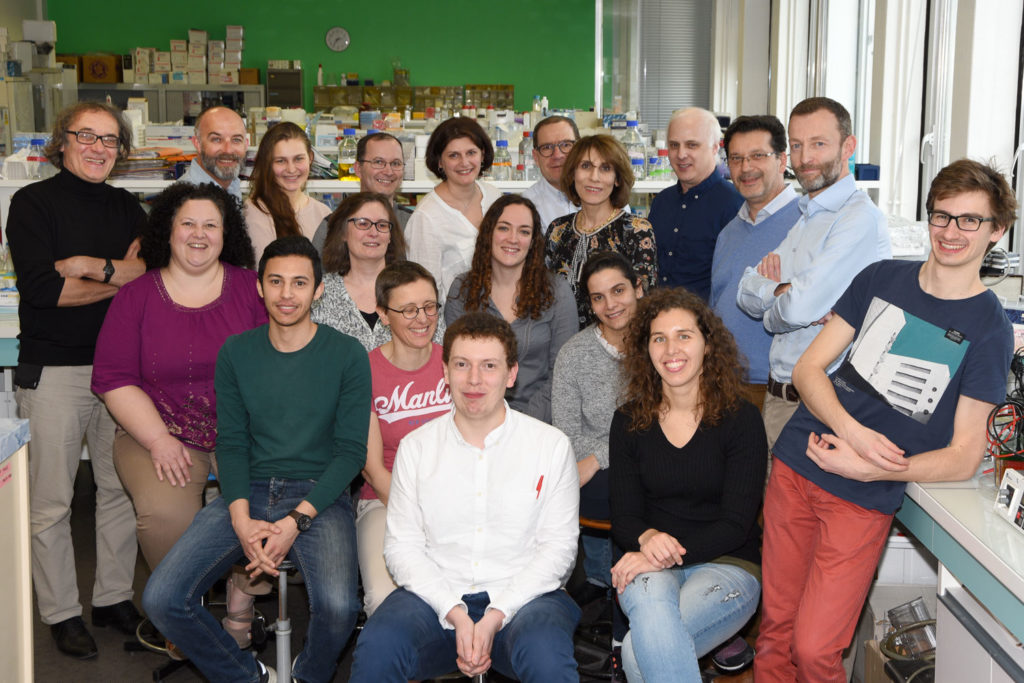 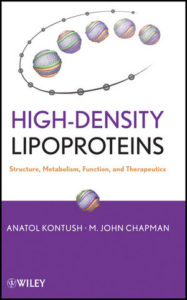 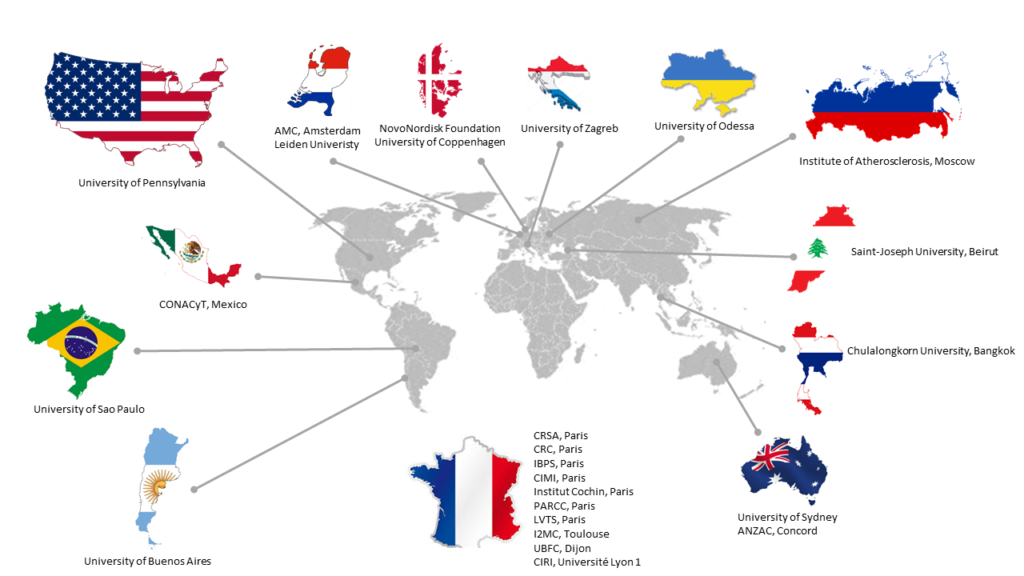 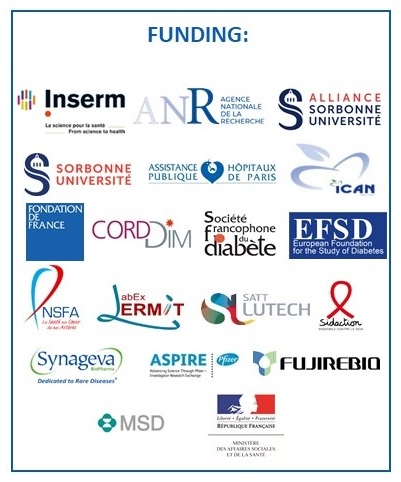